The first entry in the baptismal register for Beagle Bay is for Felix’s baby, Maria Norengbor.  During August 1896, 12 Nyul Nyul men were prepared by Fr Alphonse and baptised with great solemnity at Beagle Bay by Abbott Ambrose.  Each retained his traditional names, but took as baptismal name, that of one of the trappist monks (Sebastian, Joseph etc).  From this time on baptisms were recorded regularly both at Beagle Bay and Disaster Bay Missions.

Comments:   Not part of the news item.

Note: I could find a photo of the stone monks’ cells at Beagle Bay to illustrate the item. (Berkeley).

the French Trappists invited the media in August 1896 to witness the baptism of their first 12 young men at Beagle Bay. To the Indigenous or accepted names of the candidates they added their own personal names (Sebastian, Narcisse, Joachim, Joseph, Jacques, etc.). This must have set a strong signal of relatedness between the baptised community and their namesake Fathers and Brothers. In 1897, another 23 gathered for mass baptism, and altogether the Trappists claimed to have baptised over 200 people.30 This means that the following three years must have seen a veritable rush into this new ceremony with an average of over 50 each year.

In his history of Beagle Bay, Frank (later Father) Birrell wrote:  Up to August 1896 the only name in the baptismal register was that of Felix’s baby, Maria Norengbor, but from this time on baptisms and marriages were recorded regularly at both Beagle bay and Disaster Bay (near Lombadina) missions. In October, Brother Xavier wrote to Bishop Gibney on the occasion of the first twelve members of the Nyul Nyul tribe being received into the Church by Abbot Ambrose. Father Alphonse had instructed them all.

This weekend’s update features a profile of the five Plenary Council Members representing the Diocese of Broome. 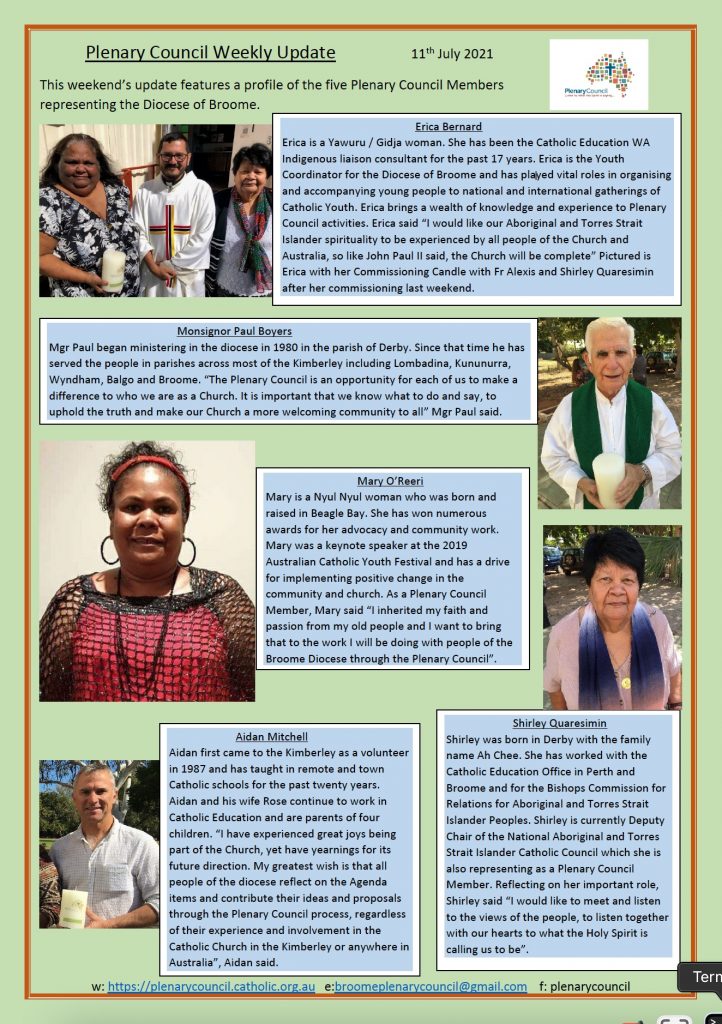 Jacqui Remond and Shirley Quaresimin caught up after Mass last weekend. Shirley is a Member for the Diocese of Broome and represents the National Aboriginal and Torres Strait Islander Catholic Commission. Jacqui, who with her family are former Broome parishioners, has the vital role of coordinating the engagement of women Members of the Plenary Council across Australia, a task which takes her far and wide.

Broome Diocese acknowledges and pays respect to the Traditional Owners and Elders, both past and present, of the lands on which Broome Diocese offices and operations are located.